With a realistic chance of finishing the tiling, I started work at around 9am. In the cool of the morning I tiled a bit before setting about finishing the battens. I needed to sort out exactly what was to happen at the top of the rake and at the verge. So, I battened to the edge and ran tiles out and set up a model with a bit of the barge board. It all looked fine, a bit of adjustment and the tiles would fall exactly to the edge. I did need to run the skill saw along the edge of the T&G to make sure it was straight. 8 meters up from the ground is not a great place to work a power saw left handed.

The battens were completed, and after lunch I continued tiling. Some cutting and messing around was necessary, but progress was apparent. I needed Monika’s help to pass tiles out of the Velux. I need some 20+ packs; it’s amazing how little cover you get from a big pile of tiles.

As the sun went behind the hill I fitted the last few tiles. Just 100 small jobs before leaving. Fitting some copper caps, plastic sheeting battened over the gap upstairs, rubbish to tidy, nail on temporary tin ridge, put power tools away, etc. etc.

We left Bonnevaux at 10pm. That’s twice we’ve done that after 12 hrs on the roof. We drove until around 2am before we searched out a cheap motel. We discovered that a central part of France is totally empty, not a street light or village for miles. We were forced to continue. By 4am we stopped in Challon and found a Premiere Inn for 38 Euros. Just a bit up market from Formula 1.

Next morning we completed the drive to the Chunnel, then the long, long, long M25/M3/A303 home. 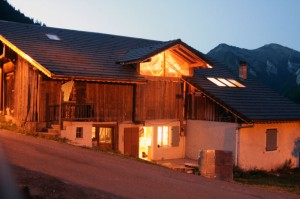 This entry was posted in Roof. Bookmark the permalink.