First thing this morning our delivery arrived. We needed some more tongue and groove boards, as some had been used to panel in the kitchen in April. We also needed more battens as last year so many had been used hold down tarps. For some reason the driver was keen to lower the package in through the roof. My French was not up to explaining that rafters were only tacked in place and would fall down if touched … 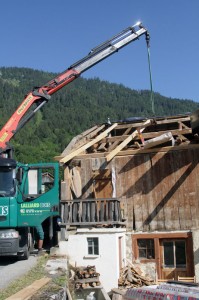 In through the roof

With the first part of the roof we spent a lot of time trying to get the rafters set out level. Since nothing much was level to start with, it was a struggle and involved lots of packers under each rafter.

This time, things seem to be working out. We took three horizontal lines using the laser level and made up the lower purling to the same height as the new part of the roof. Next we set lines at the middle purling and at the ridge. All lined up by eye perfectly and are level.

This entry was posted in Roof. Bookmark the permalink.